Now previews are done and the Edinburgh Fringe has kicked off, it’s time for me to present the last two episodes of my interactive video series, Frankie’s Fringe Focus…

Stuart is a kinder eggs obsessive stand-up, whose show this year, ‘When’s This Gonna Stop?‘ will reveal his penchant for German Christmas cookies and a hatred for spiders

He runs his own production company, Turtle Canyon Comedy, and has recently been making short comedy films (so I don’t know what he made of my makeshift iPad filming setup!) He’ll also be doing a Comedy Roast with fellow Fringe Focus guest Matt Winning – find out more on his website.

Watch the Fringe Focus with Stuart Laws on Touchcast

I’m definitely trying too hard to be a ‘too-cool-for-school’ T4-style host in my interview with Luke – but it’s quite surreal interviewing someone you know so well.

I’ve not actually seen ‘Stand-Up’, Luke’s show this year, but I’m planning to see it in Edinburgh – I’ve seen various bits of pieces at new material nights and even donated self-raising flour to his cause. But, if anything to go by last year’s show, it’s going to be awesome (and I’ll be very proud). It will also feature a talking dinosaur…

Luke also co-hosts the Alternative Comedy Memorial Society with Thom Tuck and will be presenting different acts four nights a week during the Fringe. Being the Fringe, it’s only allowed to be two hours long – I’ve never been to such a short ACMS, so I’m quite intrigued by the prospect!

So that’s it for my first interactive series! You can find a full list of featured acts here and do Tweet me your Fringe tips @getfrank. It’s been a while since I’ve properly gone out and interviewed people outside of work (and kept my voice/face in the mix) and I’ve enjoyed it so much – and that down to the lovely comics, the nice folks at Touchcast who have repeatedly given me more space on their server and everyone who has watched, tweeted or let me know they’ve been watching. You’re the best.

Hopefully I’ll get to host some new stuff in future, and I’m keen to work with others, so do get in touch with ideas!

This week, I’m catching up with one-liner comic, poet and storyteller Jake Lambert.

I met Jake through the BBC New Comedy Award and he impressed me with his natural onstage personality and his sharp, witty one-liners. He’s got a great, broad appeal (and he’s thoroughly lovely too).

While we were filming my Dad decided to interrupt us by calling me to enquire about a certain iconic sketch group… You can see what happened below in this exclusive ‘uncut’ clip.

You can catch Jake performing his free show (shared with Dom Lister) at Dropkick Murphys at the Fringe this August. Click here for more details. He’ll also be performing at Comedy Cow: Prime Cut at the start of the festival too.

I was interviewing the lovely Jake Lambert for my Fringe Focus series when my dad called with some unfortunate news… At least, unfortunate for me!

THANKS A LOT, DAD!

Howdy Fringe-goers! I’ve got two Fringe Focuses for the price of one today (basically because I was rubbish and didn’t post this last week)

First up is the extraordinarily creative Bec Hill, whose signature performance style is ‘paper puppetry’. If you want to know what that means, watch the video with future Fringe Focus guest, the musical comic Jay Foreman, below…

She’s a busy woman indeed – aside from her paper puppetry creations on YouTube, taking control of Londoners’ social media profiles (to hilarious effect) on London Live’s CTRL Freaks and running the hugely popular Pun Run, Bec is responsible for a whopping three shows in Edinburgh this August. Catch a special charity edition of Pun Run, her kids’ show with Tom Goodliffe, Bec and Tom’s Awesome Laundry, and her own solo effort, Bec Hill in… Ellipsis, at the Guilded Balloon.

Next, it’s puntastic stand-up Darren Walsh, who first wowed me with his extra creative one-liners and sound-effects back at the BBC Radio New Comedy Award in 2012.

Darren’s definitely in the running for ‘best Fringe show title’ in 2014, with the imaginatively titled ‘Chicken Meow’ (watch the touchcast to find out why) which you can catch daily at the Heroes @ The Hive for whatever you’re prepared to pay at the end.

And do make sure you check out this amazing video of Darren at the O’Henry Pun-Off World Championships in Texas from earlier this year – what a hit rate!

The ninth (yes, ninth – catch up here) episode of my foray into comedy interviews, Frankie’s Fringe Focus, is with the wickedly funny Lou Sanders.

Lou is one of those stand-ups who are hard to compare with anyone else. She’s got a unique, almost anarchic, energy about her – you trust her onstage, even though you can’t predict what she’s going to do next.

We shot this in the ladies’ loo in the Camden Head (the Camden one, not Angel), with Lou’s friend holding my iPad. After this (and my video with Lead Pencil) I realised that the main (front) camera on my iPad simply doesn’t focus properly, so from now on, even if someone else is filming, I’m going to have to film using the front camera.

Luckily Lou looks nice in this video (while I look like I’m partly made of the sun… and not in a good way) and we chat about her amazing character The Money Lady, calculate the number of jokes on offer in this year’s show, Lou Sanders in Another Great Show Again, and cover tap dancing vaginas… just because.

Click here to watch the video now. It’s interactive so you can touch it if you’ve got that kind of screen – or click with your mouse if you haven’t!

This week’s episode of Frankie’s Fringe Focus is with the marvellous comic, actor, presenter and writer Hatty Ashdown.

Not only is Hatty (a proper Kent girl like myself) a ‘quadruple threat’, she’s also thoroughly good company and has a unique personal style to be envied. Happily, she brought along a spare one of her signature headscarfs to help me get the ‘Hatty look’!

Unfortunately I had to cut down the interview as Touchcast only lets me upload up to five minutes of footage so I had to lose a fair bit – including the titbit that Hatty’s attitude towards her audience is to try and ‘feel like a friend’, a bit like her aunties who she grew up with and were ‘the life and soul of parties’. Her first full-hour Edinburgh show, titled Hurry Up Hatty (after the Sham 65 song Hurry Up Harry), will showcase some of her strongest material and promises some ‘showbizzy bits’ along with observations about her ‘lazy family’. After Edinburgh she’ll be ‘putting it to bed’ so she can start performing ‘new stuff’.

You can catch Hatty performing throughout the Fringe at the Wee Pub at 15:45 – and it’s free! Watch the video here.

I met Matt, like many of his comedy peers, through the BBC New Comedy Award. He stood out due to his energetic, slightly absurd, abstract punchlines and unique comic ideas. 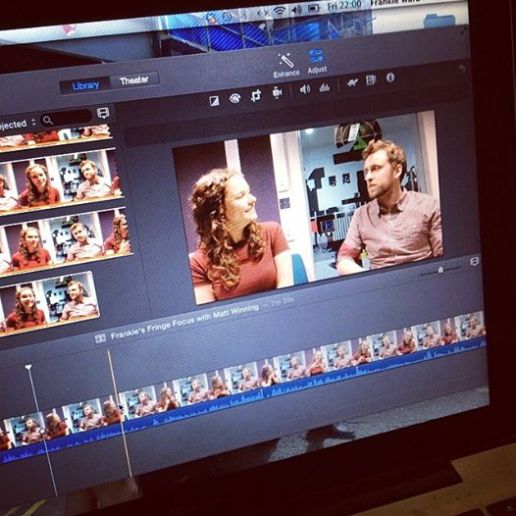 This was actually one of the first interviews I recorded for the #FringeFocus series, so I was particularly grateful to Matt for being a guinea pig of sorts! He’ll be sharing an hour slot on the PBH Free Fringe with fellow stand-up Lolly Adefope at the Southsider between the 2-23 August at 16:30. Matt and Lolly will also be appearing together as part of the hugely popular Bearpit Podcast Podcast – which is a snip at a measly three quid a ticket. In other words, go and see both – you won’t regret it.

Watch Matt Winning talk about his past and Future Fringe shows on Frankie’s Fringe Focus on Touchcast now.

My latest Fringe Focus is with political activist and stand-up Chris Coltrane.

We met up to chat about his 2014 Fringe show ‘There’s No Heroes Left Except All of Us‘, but found that the space we planned to film otherwise occupied. Improvising in the baking hot sun, the ever-resourceful Chris ferried a wooden bench across the road from the pub, to a spot on the kerb.

We started recording, but my iPad had other ideas…

Luckily though, we soon got back on track, and so you can find out about why Chris got into performing comedy about activism, his favourite fellow political comics and how you can listen to his 2012 and 2013 shows for free – what a bargain!

Oh hi guys, I did another one of those Fringe Focus videos, didn’t I?

This one is with the super duper awesome Phil Wang, who delighted me by saying yes when I proposed shoving my iPad in his face and asking about his now legendary ability to craft ‘intellectual dick jokes’.

See, here we are having a right laugh about them. Or at least I am. (It was my joke. Apparently I should stick to asking questions and sporting orange lipstick. Although even the latter is questionable.)

If you’d like to watch me getting interactive with Phil about his Fringe show, Mellow Yellow, simply go to my Touchcast Channel and watch it! (Give it a try, it won’t bite…)

Find out more about Phil Wang on his website.

For the past couple of years, I’ve worked at the Edinburgh Fringe, trying to squeeze in as many shows as possible between the ones I was working on.

This year I’ll actually be going as a holiday – but I still wanted to do a project that celebrates the festival and the acts who’ll be performing there this August.

Each Saturday, I’ll be publishing a video interview with one of these acts on Touchcast, pulling in their posters, videos and much more. We’ll be chatting about their shows, previous festivals and the shows they’ll be in the front row for, come the summer.

The first of these interviews is with comedian Tom Webb. He’ll be taking two shows to the Fringe this tear, a stand up show, ‘MegaDudes Crime Club‘ and ‘MegaGames with Tom Webb‘, in which he plays mass-participation version of classic games with his audience. 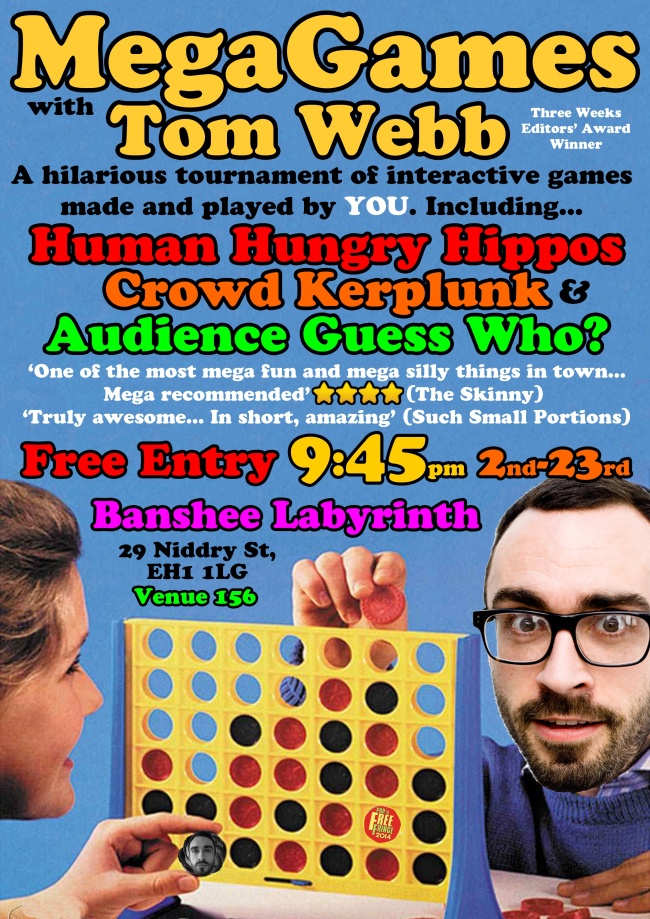 We chatted about his shows, giant games of Human Hungry Hippos and how nuts may help to stop you from going crazy during the gruelling festival schedule. Watch it here.

Next up I spoke to writer and stand-up Grainne Maguire about her Edinburgh panel show, ‘What Has the News Ever Done for Me?’, her first full-length show about bonnets and rain and incorporating 80s jeans and competitive dance moves into her last festival effort.

You can find out who Grainne would love to bring some ‘sex appeal’ to her panel show by watching the Touchcast here.

In the coming weeks, I’ll be talking to sketch group Lead Pencil and comedian Matt Winning.

Marriage. Dog. TI. Baby.
Speed running obsessive? Nintendo fankid? You'll LOVE this week's episode of the #SaveYourGamePodcast from @redbullgaming.
The new episode of the #SaveYourGamePodcast from @redbullgaming features @jacketienne. We go back in time to the early days of @Cloud9 and discuss the three games that have shaped his life, including one that became a surprising business...
The chaos and the calm.
ESL Pro League Group B starts today... the B stands for 'big hair', right? 😄
The latest episode of Save Your Game - the @redbullgaming Podcast features @t1.esports CEO Joe Marsh talking about childhood games, college LANs and future esports titles. It's a proper journey from way back to now and was brilliant to record.
Loading Comments...