Next Friday (10th December) I’m playing a festive gig with The Union Choir at Newcastle’s Cluny.

It’s for NARC magazine‘s annual ‘Stars in their Eyes Xmas Party‘ event where a selection of North East acts perform three cover versions of songs by a band of their choice.

Anticipation for the event is high, with acoustic folkers Rainfalldown performing (sadly June Carter-less) as Johnny Cash (and band), post punk revivalists Cult Image as The Ramones, Holy Mammoth as Blink 182 and us, The Union Choir, as The Velvet Underground and Nico. Amazing Radio‘s Tom Cotton will also be DJ-ing… as himself. 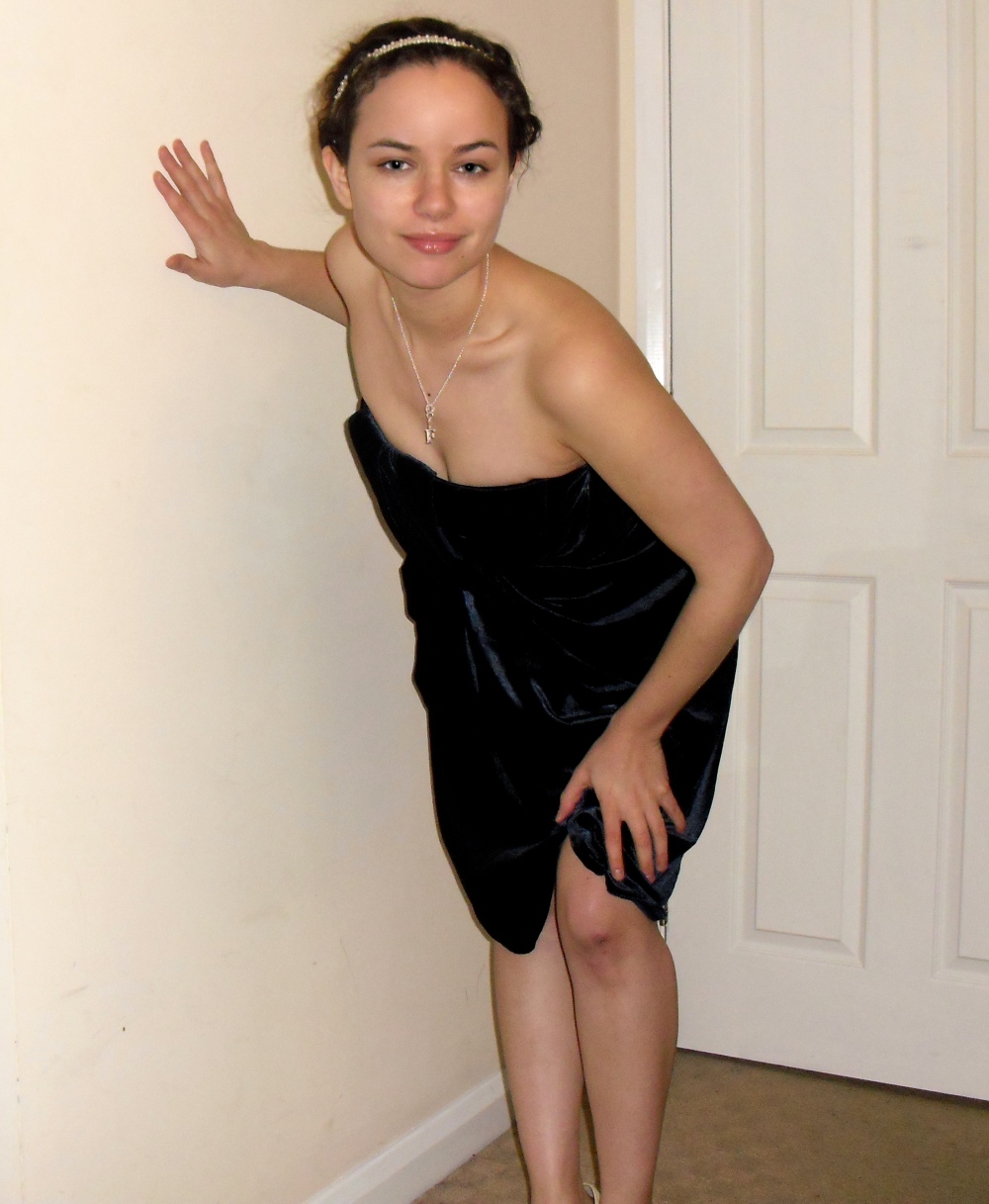 [Post bath I decided not to leave the house hence the absence of makeup/decent hair. I did try to make myself ‘decent’ by removing the red eye in this photo, but it’s left me looking even odder!]

With every gig comes the occasionally frantic question of what to wear. I’ve decided to take our incarnation as The Velvet Underground (and yes, technically I’m ‘Nico’) quite literally by wearing this velvet number by George @ Asda. I found it online and headed into the Heaton Asda Living store on a whim after snow rendered me unable to travel to Birmingham. I’d decided to get some bubble bath and have a sulky soak as i’d taken the day off work for my journey to the midlands, but then this dress was too tempting to resist trying… It was reduced from £24 to £14 and is a beautiful shape, texture and colour. It’s not too risque lengthwise (but has a slit at the front so could be if I’m not careful!) You can find it online here.

I haven’t accessorised fully in the photo but I’m wearing pearly mary jane style shoes (with a ribbon tie) and a charm bracelet pendant necklace that my dad got me as a graduation present. I’m also wearing a fake pearl headband by Accessorize but I think I’ll ‘toughen things up’ with my leather jacket, smokey eyes and loose hair for the gig itself.

Hope you can make it down!

None currently booked - email frankiepromotes@gmail.com if you'd like me to play

Happy Feb 14th. May you find the plumber to your electrician (if you haven’t already).
There are a couple of moments in my hosting career that changed my life. One was E3 2018’s PC Gaming Show. The other was being part of #IEM Katowice CSGO Major 2019 with @eslcs. This is a snap of me backstage on the day Astralis won their third star. I can’t wait to go back.
Love this shot @maciejkolekcom took of me and @iancrimsix onstage in London at @codleague. A highlight of a weekend where I got to be part of a fantastic team - the broadcast talent were especially welcoming and I’ll jump at the chance to guest again. Thanks also to the production and teams for having me on board.
“DO. NOT. TILT. YOUR. HEAD. WOMAN.”