My family isn’t really known for being musical. My dad played trombone and accordion when he was younger (I don’t really know how well!) and my sister played alto sax for a while (and I don’t even know for how long!) I would say I’m probably the most ‘musical’ in my immediate family.

However, not so long ago I discovered my dad’s cousin, Graham Ward is a former child ‘drumming’ prodigy who played the drums in the movie of Bugsy Malone and owns a recording studio in LA. Nice huh?

Anyway my dad is going to LA (I think for work…this is a rather unsure blog!) and is hoping to pop by so he’s going to try and take a CD of my music along. I guess because we both record (him obviously having the upper hand of a luxury recording complex!) 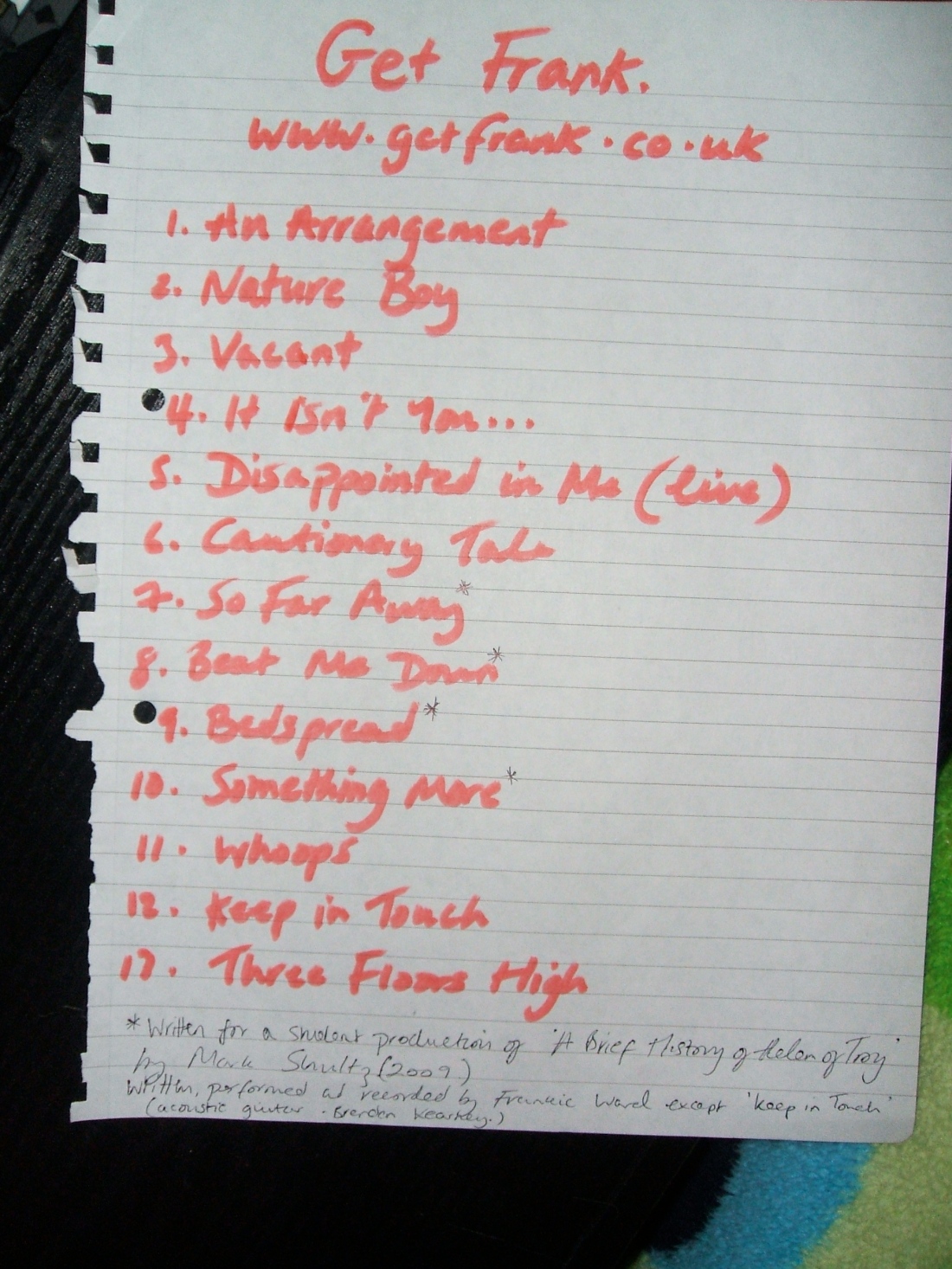 This is the tracklisting for the CD I’m sending to LA via ‘Dad mail.’ Not all of these songs are on my soundcloud yet, but the ones that are you can download for free. I’ve been recording over the past couple of days so I’ll put them on my cloud soon. I would have put them up already however the Soundcloud site won’t let me upload more than five tracks per month. I have made all of the featured songs on my myspace downloadable so you can grab and go from there! I hope that people who like my music will pass it on and possibly blog about it, however I know my recordings are scrappy. I can’t quite capture my voice as I like it – I know that vocally, I’m much better live. The effects on my desk aren’t great and the reverb is rather difficult to program. I also have coined myself the phrase that ‘I haven’t the time for a metronome’ because none of my recordings are recorded to a click track. I record to literally keep a record of what I’m writing and creating and I like to be quick. If I was recording with other people it would probably be more fun and a more precise process.

In terms of uni work I’ve got a 1,000 creative analysis of a radio play I’ve produced and designed the sound for and I’m ready for the next semester. Hurrah!

View all posts by Frankie Ward

2 thoughts on “It Runs in the Family (I think)”

For my favourite episode of the @redbullgaming #SaveYourGamePodcast so far, I spoke to @hexsteph about falling in love with a text based game, one of the greatest stories ever told in videogaming and the joy of a looter shooter.
The garden is starting to take shape so we bought a bench to try and enjoy the odd moments of sun before the summer ends... Will be updating stories with the latest developments from the house and garden renovation!
Finals look for #IEM Cologne. Can't believe it's all over. I'm finally home after four weeks away and a bit of a journey - was really lovely to see the response to the event, so I feel extra lucky to have been part of it.
These women are the key to an amazing event. It's not easy being in a bubble working round the clock but they all managed to make the magic of #IEM Cologne happen, while also being brilliant be around ❤
Went outside. My supervisor took a photo of me trying to tourist.
Playoffs time at the Cathedral Camp #IEM
Loading Comments...
%d bloggers like this: